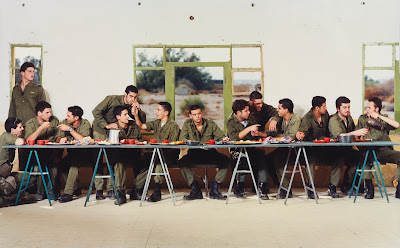 As snow showers fell on Manhattan’s Upper East Side this afternoon, an untitled photo by Israeli artist Adi Nes sold for a record $377,000 at Sotheby’s Auction House. Part of its annual sale of Israeli and International Art, the print is a scene from Nes’s Soldiers (1999) series based on Leonardo’s “The Last Supper.” It is number four from an edition of five. It was estimated to sell for $80-$100K; its sibling print, Number 2, sold for $264,000 six years ago, which was a record price for work of Israeli art in 2006.

Nes’s works are said to digitally manipulate or pose Israeli soldiers in a variety of scenes that question the machismo ideal or juxtapose them in classic Israeli pioneer images. In this work, Israeli soldiers imitate poses from “The Last Supper,” except they are more relaxed, a bush stands in for a halo around the central character, they use standard issue IDF cups and plates, and there is one additional man in the scene. The central character looks dazed, perhaps shell-shocked and apart from his comrades. Nes says it is not their last supper. Suite @ Jewlicious.
Publicado por Unknown en 11:19 No hay comentarios: